This has been a fascinating US Presidential campaign. Neither of the two leading candidates, Hillary Clinton and Donald Trump have been popular with the electorate. Memorable phrases like “build a great wall”, “drain the swamp of Washington” and “basket of deplorables” have marked this campaign. The election has become an epic contest that is more focussed on generating fear and loathing than inspiring ideas and detailed policies.

So one week out, putting aside the sound and fury, what are three questions investors most want answered?

The Clinton policy proposals appear to be the usual Democrat promises of more government involvement through budget stimulus measures and market regulation. The Clinton plan is notable for sharply higher taxes on the wealthy and tougher tax avoidance measures, increased infrastructure spending and a pledge to support higher minimum wages. There’s a commitment to introduce a new corporate tax targeting the ‘untaxed’ foreign profits of US multinationals.

Trump’s candidacy is a unique combination of the traditional Republican ‘lower taxes and smaller government’ pledges combined with anti-globalisation and anti-immigration proposals.

Large income and corporate tax cuts feature prominently in Trump’s plan. The most concerning element of Trump’s rhetoric is his antagonism towards international trade and immigration. Trump has condemned globalisation as “moving our jobs, our wealth and our factories to Mexico and overseas.” There is a protectionist element to these pronouncements that rising import tariffs and preferential treatment for US corporations will preserve American jobs without costing consumers access to cheaper goods.

There are numerous bold spending promises based on the financial sector and private enterprises providing the money. Trump has pledged a US $1 trillion rebuilding program for infrastructure based on “private investment funding”. This is clearly ambitious, but Mr Trump is convinced that US economic growth can accelerate from the current 2% pace to “go higher than 4%” or even “go to 5% or 6%”.

2. What is the potential market impact of a Clinton or Trump presidency?

As there’s been no independent audit of either candidate’s policies by the Congressional Budget Office, the impact of their policies on future US budgets is highly debatable.

A President Clinton presents one important challenge to market stability. Her commitments to increase regulation of health care companies and target the foreign profits of US multinationals are negatives for these sectors. Even allowing for the potential benefit of more infrastructure spending on US economic growth, these regulation and taxation measures could adversely impact US shares in these sectors.

A Trump win is likely to lead to broader and more significant financial market turbulence in the short term, given the candidate’s controversial announcements on international trade. The exchange rates of America’s major trading partners (Mexico, Canada, China) are likely to be volatile. A stronger US dollar would be the initial response. The more aggressive Trump budget stimulus program (lower taxes, larger infrastructure spend) could place upward pressure on US Government bond yields by raising concerns over the US budget deficit. So the impact of a Trump victory on US shares would be a strange mix of positives (lower corporate taxes) and negatives (higher US dollar, higher US interest rates) that could prove either favourable or painful for Wall Street.

However, this is really only an analysis of promises that may never be actually implemented if there is Congressional opposition. Implementing these policies efficiently and rapidly will require Congressional support. The Republicans currently control both the Senate and the House of Representatives, and this Republican Congress has generated acrimony and gridlock with Democratic President Obama. Clearly, either candidate would prefer to work with their party members in a Congressional majority to ensure policy is implemented. As individual Congressional election contests are typically driven by local matters, they are impossible to call on a national basis.

3. Can we rely on the current polls for a winner?

With a week to go, the polls favour a Clinton presidency, but politics is known for surprises. Britain’s Brexit decision in June and the history of some remarkably close US Presidential election results (Truman 1948, Kennedy 1960, Carter 1976, George W Bush 2000) serve as a warning that this election could still take a remarkable turn.

Chart 1 shows the weighted average of key opinion polls collected by the Financial Times, which favours Hillary Clinton becoming the President by a margin of approximately 2%. 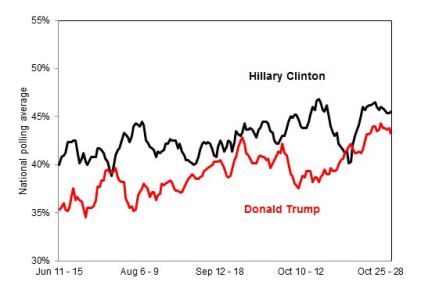 However, American political polls face some hard challenges in accurately predicting election outcomes. This is a voluntary voting system that has historically produced low voter turnout. So the winner may be decided both by the commitment of their supporters and the apathy of their opponents in not voting. US voters may have also been camouflaging their actual voting intentions because of embarrassment. Voters may also be unwilling to make the decision until the final moment in the polling booth. For all political polls, there is always the problem that the sample may not be representative of the voting population.

In the US political system, there is the additional complication that the candidate actually needs to win 270 of the 538 Electoral College votes allocated, rather than simply gaining the outright national majority. These Electoral College votes are spread across the 50 US states and the District of Columbia. In most states, the vote is ‘first past the post, the winner takes all’. So winning the majority in the states with the largest numbers of Electoral College votes  – California (55 votes), Texas (38)  Florida (29) and New York (29) – as well as carrying the majority in the smaller US states, is critical to taking control of the Oval Office.

So investors shouldn’t rely on the current polls to assume this US Presidential election is over. The old adage, ‘a week is a long time in politics’ is particularly apt for this election.

This communication is directed to and prepared for Australian residents only.

Many of us spend a great deal of time planning for our retirement but understandably, often do not put the same degree of effort into planning for our deaths. It is not always a pleasant topic to … END_OF_DOCUMENT_TOKEN_TO_BE_REPLACED